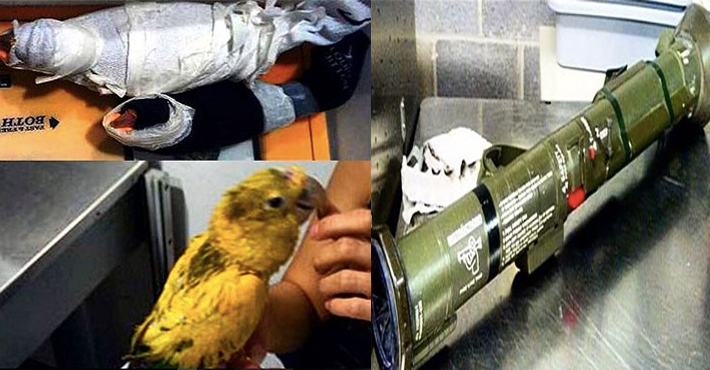 For an agency whose sole purpose is to keep us all from getting blown up on planes and such (or so they tell us, anyway), the Transportation Security Administration certain isn’t very popular. Sure, they’re the reason for the long lines we have to stand in before we get to our terminal. They make us take off our shoes and use x-rays to take naked photos of us. And, worst of all, they make us throw away those little shampoo bottles we got at the hotel that we forgot to put in our checked baggage. I was gonna use that on the plane… for reasons I don’t feel like explaining to you right now!
It is a tough job, however – probably one of the worst “customer service” jobs in the world and we appreciate the fact that at least someone is making an effort to keep us safe. Especially when you consider some of the weirder stuff they have to confiscate while on duty. Like, say, these 25 things. Some are plain strange and others are like “I can’t believe I was almost on a plane with that” scary. Let’s take a look:

You know, bringing a smoke grenade onto a plane is a bad idea. Obviously. But, if you’re going to do it, it is considerate to bring on one with such a festive color. Perhaps this person was just distraught over the death of Prince and this was their way of tribute?

Well, since I used the “snakes on a plane” joke already. Um… Looks like the dude brought on a trouser snake! Ha! Am I right?! A trouser snake! I’ll be here all week.

It’s totally reasonable to want to be prepared in case of crashing landing. That’s why your seat turns into a flotation device and stuff like that. So, the airlines more or less have this stuff covered. So, leave the fireworks at home, OK Gandalf? Thanks.

I’m so confused. Why is Batman flying Delta? Doesn’t he have his own plane?

Seriously! WHERE THE F*^& ARE THESE PEOPLE GETTING THESE?! I’m not even upset that they tried to get this on an airplane. Can you imagine some ISIS nutjob trying to hijack a plane and some badass lady CIA agent pulling out some Murder Lipstick and taking him out? Awesome. Also, I used to play bass for Murder Lipstick.

Fortunately it was a dummy vest that belonged to an explosives trainer. Great at training people about explosives. Not so great at knowing how airports work.

There’s a reason they don’t let you bring regular knives on a plane – they have the potential to be kind of stabby. Throwing knives are a whole other level of stabby. They basically say “I really want to stab that guy but he’s way over there.” (I’m paraphrasing George Carlin here, by the way)

#8 Bullets in Carry on Bag at Richmond International Airport

Just having one bullet on your person is reason enough for you to be pulled out of line and questioned extensively. So imagine the sarcastic delight of the TSA agents at the Richmond airport when they came across this county of beauties. I don’t know if the person who brought these also had the gun that went with these but, if they did, it would probably move this from “weird” to “AHHHHHHHHHH! RUN!”

For those who aren’t entirely sure – like I was until I Googled what an “inert grenade” was (I never claimed to be a genius)(not often, anyway) – an “inert grenade” is basically a fake grenade. Usually used for military or security training purposes or to make one of those hilarious “Complaint Department – Take A Number” gag desk ornaments. So, while perfectly safe, can you imagine the panic on an airplane if some knucklehead decided to pull one of those out and play with it? Leave that crap at home, Ted Nugent.

Look, I like a good avalanche as much as the next guy. But, come on. Everybody knows you FedEx an avalanche charge to where you’re going. Do you really want an avalanche on your plane? Come on, dude, think this stuff through.

Two things. One – are anti-tank weapons common in Pennsylvania? I suppose I can see some people in Philly walking around with these, but it still seems off. Two – Arnold Palmer has an airport named after him?

The woman involved here was arrested for smuggling birds. What isn’t widely reported is that the birds each had swallowed two bird-sized condoms full of black tar heroin. However, thanks to a legal loophole, the birds were only sentenced to community service.

#14 Live Eels that in Checked Bag at Miami International Airport

Snakes on a plane! Am I right, you guys? SNAKES ON A PLANE! HAHAHAHAHAHA! Guys? Guys, where are you going? Come back, you guys! I’M SORRY!

Clearly, you don’t want someone bringing a cannon onto a plane. But this thing, as we said, is centuries old My only theory is that whichever TSA agent confiscated this grabbed it, looked at the smuggler, and said in his best Harrison Ford impression “This belongs in a museum!”

It had climbed into her owner’s suitcase while she was packing for her trip without her knowing. This story would be a lot cuter if it weren’t for the look on that dog’s face. Seriously. “I would have gotten away with it, too, if it weren’t for you meddling TSA agents!”

Although the TSA didn’t know what it was, they were sure that it shouldn’t be allowed on the airplane. I don’t know what this is, either. In fact, I’m completely stumped. Is it something you put on your keychain to murder attempted muggers or rapists? A really complicated bottle opener? I don’t even have a joke. What the hell is this thing?

#18 Throwing Axes Found in Carry on Bag at Baltimore Airport

“Throwing knives?!” these seem to be saying, “What kind of wuss are you?” Basically, there’s really only two non-murdery reasons for having axes of this size. You’re either in the circus, or you’re a lumberjack that cuts down really tiny trees.