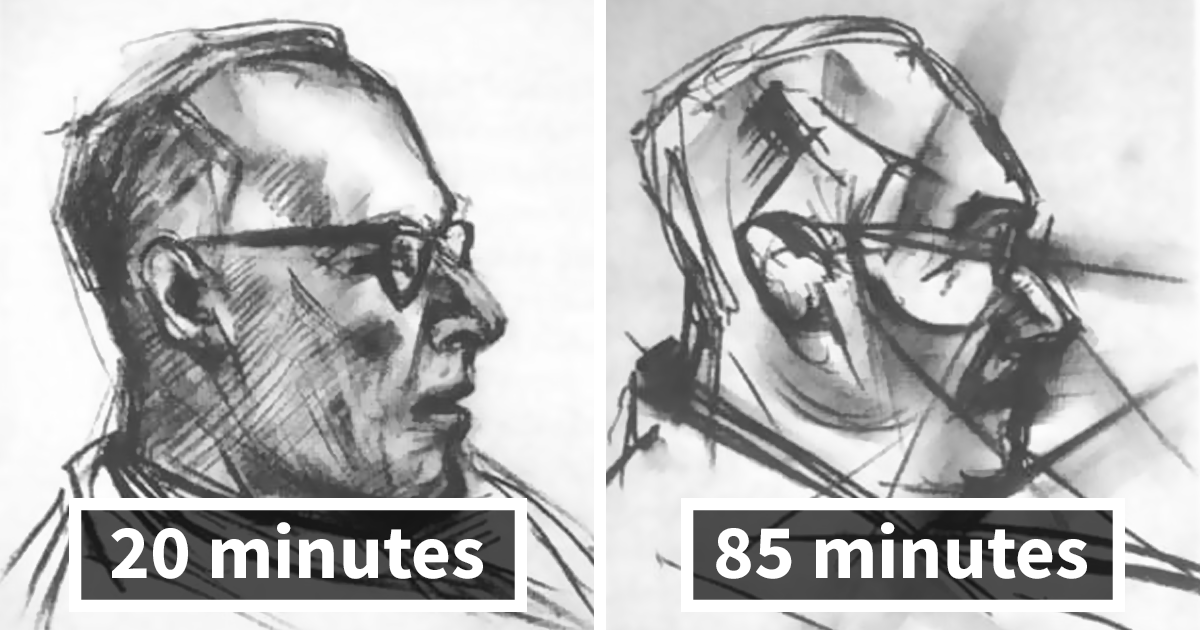 The US government is no stranger to experiments.

US government used to do all sorts of weird and wonderful experiments. During the 1950s, the US government experimented a lot with psychotomimetic drugs by giving human subjects the drugs and viewing changes in their brain activity.
However, in one experiment, psychiatrist Oscar Janiger from University of California-Irvine gave an artist two 50-microgram doses of LSD (each dose separated by about an hour), and then the artist was encouraged to draw pictures of the doctor who administered the drugs.He asked the artist to draw the same portrait 9 times during different phases of the drug.
The web site Live Science has Andrew Sewell, a Yale Psychiatry professor (until his recent death), on record saying: “I believe the pictures are from an experiment conducted by the psychiatrist Oscar Janiger starting in 1954 and continuing for seven years, during which time he gave LSD to over 100 professional artists and measured its effects on their artistic output and creative ability. Over 250 drawings and paintings were produced.”
The goal, of course, was to investigate what happens to subjects under the influence of psychedelic drugs. During the experiment, the artist explained how he felt as he worked on each sketch,”Things start out normally enough, but it doesn’t take long before the artist’s perception of reality starts to warp, and his drawings capture in fascinating detail the various stages of his hallucinogenic journey.”
The portraits, uploaded by juraganyeri, were very fascinating.Have a look at them:

An attending doctor observes – Patient chooses to start drawing with charcoal. The subject of the experiment reports – ‘Condition normal… no effect from the drug yet’.

The patient seems euphoric. ‘I can see you clearly, so clearly. This… you… it’s all… I’m having a little trouble controlling this pencil. It seems to want to keep going.’

Patient appears very focused on the business of drawing. ‘Outlines seem normal, but very vivid – everything is changing colour. My hand must follow the bold sweep of the lines. I feel as if my consciousness is situated in the part of my body that’s now active – my hand, my elbow… my tongue’.

Patient seems gripped by his pad of paper. ‘I’m trying another drawing. The outlines of the model are normal, but now those of my drawing are not. The outline of my hand is going weird too. It’s not a very good drawing is it? I give up – I’ll try again…’

Patient follows quickly with another drawing. ‘I’ll do a drawing in one flourish… without stopping… one line, no break!’ Upon completing the drawing the patient starts laughing, then becomes startled by something on the floor.

Patient tries to climb into activity box, and is generally agitated – responds slowly to the suggestion he might like to draw some more. He has become largely non verbal. ‘I am… everything is… changed… they’re calling… your face… interwoven… who is…’ Patient mumbles inaudibly to a tune (sounds like ‘Thanks for the memory’). He changes medium to Tempera.

Patient retreated to the bunk, spending approximately 2 hours lying, waving his hands in the air. His return to the activity box is sudden and deliberate, changing media to pen and water colour.) ‘This will be the best drawing, like the first one, only better. If I’m not careful I’ll lose control of my movements, but I won’t, because I know. I know’ – (this saying is then repeated many times) Patient makes the last half-a-dozen strokes of the drawing while running back and forth across the room.

Patient continues to move about the room, intersecting the space in complex variations. It’s an hour and a half before he settles down to draw again – he appears over the effects of the drug. ‘I can feel my knees again, I think it’s starting to wear off. This is a pretty good drawing – this pencil is mighty hard to hold’ – (he is holding a crayon).

Patient sits on bunk bed. He reports the intoxication has worn off except for the occasional distorting of our faces. We ask for a final drawing which he performs with little enthusiasm. ‘I have nothing to say about this last drawing, it is bad and uninteresting, I want to go home now.’