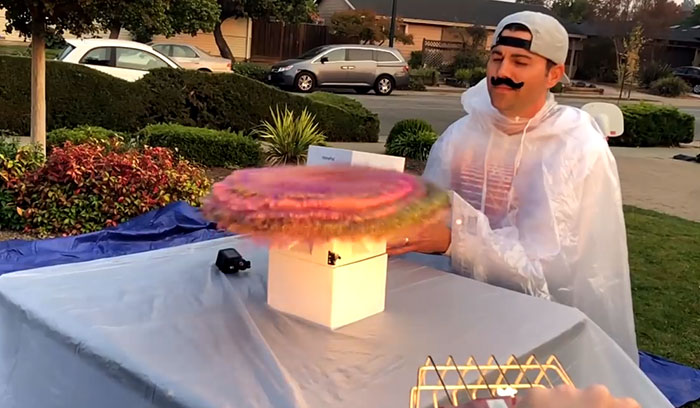 YouTuber Mark Rober noticed something fishy happening with his package deliveries. They weren’t getting to him, or rather, they were…only someone in the neighborhood was stealing them, and he came up with a gassy way to get back at the robber.

Something strange was going on in YouTuber Mark Rober’s neighborhood. Strangers were stealing packages from his porch, and it was starting to tick him off. So, he came up with an ingenious solution using his skills as an ex-NASA engineer. Once he concocted his little revenge device, his video went viral, like, really fast!

Caught In The Act

Mark used security cameras to capture the sketchy thief in the act. It turns out, it wasn’t just a single person. Apparently, a couple was walking by his house and decided to make a quick pit stop to go grab something. Unfortunately, that something was one of his packages.

Mark was upset, but he was also eager to teach these thieves a lesson. After all, if it happened once, it could happen again, and this wasn’t something that he wanted him or anyone else in the neighborhood to experience.

He did some brainstorming and then came up with a plan, but he didn’t do it alone. He had help from some engineer friends once he realized his qualified idea was more complex than he had initially anticipated.

It took Mark and his engineer friends six months to prepare this trap for the package thieves. But finally, he had finished the device, and now, he was about to finally test it out to see if it worked. He kept his fingers crossed and hoped the time and resource he spent wasn’t for nothing.

The concept was pretty basic, really. Someone would leave the package on the porch and when the robber took it and opened it, the box would sprinkle a massive amount of glitter all over them, making them wish they’d never stolen anything in their lives.

Blink Of An Eye

The dispersive force would happen so quickly that the thieves wouldn’t have time to close the box. This would leave them covered in glitter for a couple of years. But to make things more interesting they added a fart spray.

Eye Of The Beholder

The box also came with 4 cameras that were strategically placed so that it would capture the thieves’ reactions when they got sprayed with the odious fart smell. And best of all, they never saw it coming, even though the clues were right in front of them.

The sender on the label was Kevin McCallister and it was going to Harry and Marv, the two thieves who went to jail thanks to Kevin’s genius traps in the film “Home Alone.” Now he just had to set up the trap.

Mark added a GPS tracker so he would know where the thieves were living when they opened the box. But they weren’t the last thieves he pulled this trick on and they too got recorded. Hopefully, they all learned their lessons when they got a glittering dose of karma. Now if you want to watch this epic glitter fart spray in action, make sure to watch Mark’s video here.