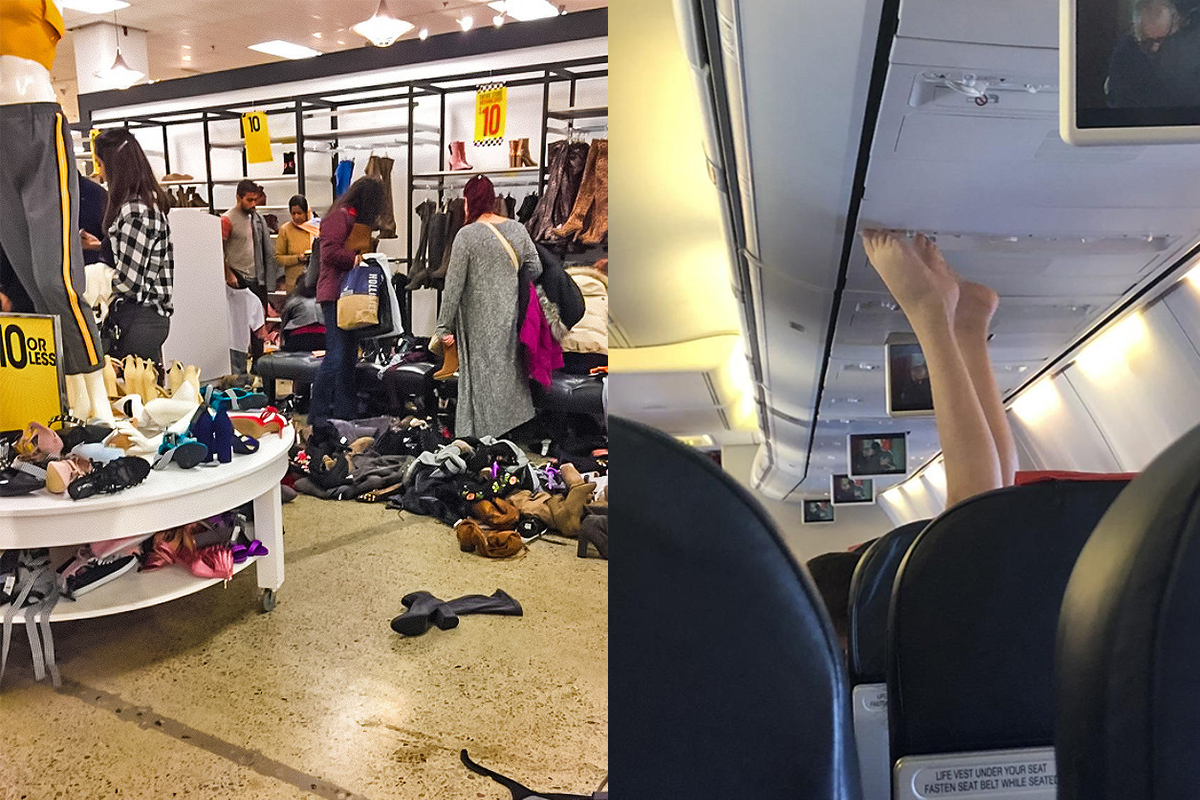 You can probably think of one thing that other people do that really ticks you off. Worst of all? These people may not realize they’re even doing it! But their little quirks might be too much for you to handle at times. As a matter of fact, they make your blood boil and kind of want to make you smash your phone against a wall. Yup, it’s that bad.

They say that no good deed ever goes unpunished. Well, this local theater learned their lesson when they gave out free popcorn. Customers decided to repay the employees by leaving a mess on the floor. Now they’ll probably recycle that popcorn in revenge. Seriously? This is why we can’t have nice things.

You want to scream when you see a loved one leaving a $900 iPhone on the edge of a counter like this. When it falls and the screen shatters into a million pieces, they’ll beg you to get them a new brand new one. Do they think money grows on trees?

You’re the absolute worst if you’re one of those motorists who likes to turn on the high beams for no reason. Congratulations! You got our attention. What are you going to do now? Wait and see if we’re so blinded that we drive ourselves off the road?

Toes On The Plane

How inconsiderate! This woman kicked her heels up and put her toes on the airplane’s air conditioning vent. The entire cabin probably smelled like Cheetos. Why can’t people act like grownups on a flight and keep their stinky feet on the ground?

If we bite into a donut, it better have some kind of jelly or Bavarian cream inside. Whoever did this needs to go to prison. If we wanted to eat something with tons of beans, we would go to Taco Bell and ordered ourselves a burrito.

Don’t you just hate it when the people at Dominos cut your pizza like this? But that’s the kind of service you can expect from a minimum wage paid employee. Next time, ask them not to cut it, so you can do it yourself.

Put Your Stuff Back

One of the biggest things that peeve shoppers off is when other customers peruse through things, try them on, and then leave them everywhere. You can’t help wondering if they were born in a barn? Didn’t anyone teach them to put things back where they found it?

You slaved over ingredients for hours to make the perfect pie, or maybe you bought it at the store and told everyone you made it. Regardless, you offered your guests a slice of pie. Instead, they clawed scoops of it up like a bunch of Neanderthals.

This person must not like pizza crusts. So, what did they do? They thought outside the box, or in this case, inside the circle. Instead of cutting a slice and then removing the crust, they cut a pizza slice within the pizza pie. So lazy!

You go see your favorite musician perform live! You’re so excited about it! You waited all week but this moment, but then, someone in front of you decides to record the whole show to post it on YouTube later to get two likes. Meanwhile, they blocked your line of sight the entire time with this Smartphone.