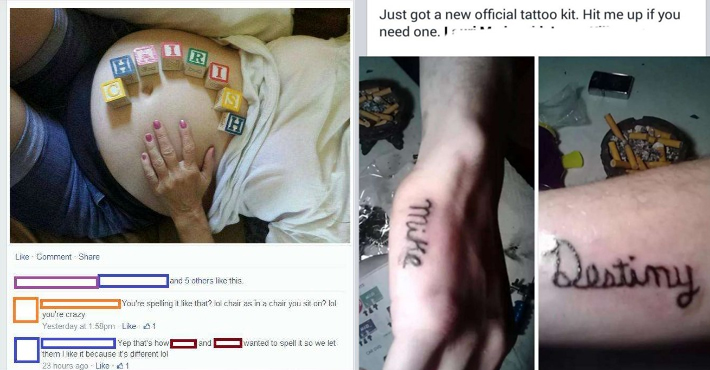 In this era of social media we see many people posting various stuff online thinking they are being funny or smart! But at times it comes out completely different than what they intended it to be ! Go through this list of 15 such people who got a taste of embarrassed later when they saw what they did was a complete fail!

#1 It is in your moments of decision that your “destimy” is shaped.

#2 Out of Prison, But still looks like wearing one of those prison cloths maybe missing them so much!

#3 Minions are rocking the world of many people now a days!

#4 Done by kids so its acceptable completely otherwise we wouldn’t be able to chairish the moment this well.

That’s why we don’t suppose to post everything on social media because sometimes it make us get caught red handed in front of others.

When someone ask ‘What are you doing?’ You must check what is wrong and reconsider whats been done

Many people use Anonymous logo as a profile picture now a days and some try to brag we are anonymous and stuff and so does this guy was trying but got instant slap from a friend!

When you have family members in friend list you must think twice before bragging about something online because someone will surely reveal the truth.

When your mom try to post a pic she clicked of you but she describe it in some different way, though she was only talking about the drink keep your thoughts clean people.

This is just beyond a fail. This is epic cringe worthy stuff. It will make you ask all the questions together.. what…how..WHY!!? still wondering!

This dude has some serious struggle going on. i don’t even know where to start! BRB *getting my dictionary* . LOL!!

#13 This guy has some serious explaining to do!

When you have no clue between a Google search and a facebook status update, you are bound to end up in situations like these! Elena as sure is creeped out!

You better study so that you don’t end up in such pics! *eye roll*

That’s a chat for everyone to read. Easy to forget that its not a chat window, eh?