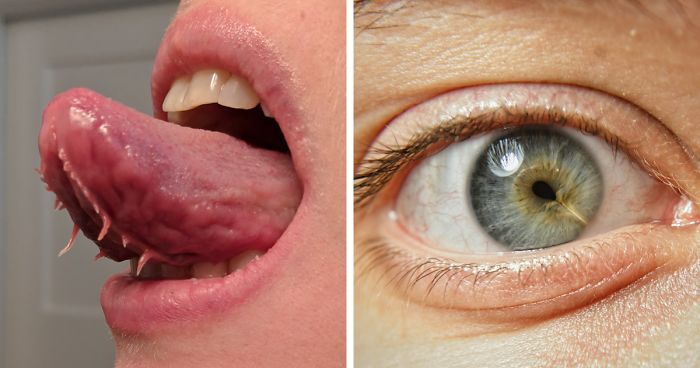 Everyone is unique in their own way. But we all know someone whose genetics truly makes them stand out from the crowd. From extra limbs, genetic eye mutations, natural elf ears, and weirdly placed freckles, these folks are seriously one-of-a-kind. You’ll instantly fall in love with these people’s unique physical traits.

The Girl Who Was Born Without a Nail

Most of us have a freckle or a scar that makes us truly unique. But this little girl was born without a nail on one of her fingers. Her distinctive condition is called Anonychia . Now, some of the people who are born with this abnormality are typically missing all of their nails. But, in some cases, (hyponychia) only a portion of the nail is missing.

Boy With a Cute Elf Ear

You’ve seen adorable elves on the television and movies. But have you ever seen anyone with an elf ear in real life? Thanks to a congenital malformation called “Stahl’s ear,” this boy ended up with the cutest elf ear. In order to “fix” the misshapen cartilage, doctors can correct the malformation with surgical and non-surgical procedures. But what would be the fun in that, right?

We all feel a little self-conscious when someone stares too much. But sometimes people are just curious about the other person. This Redditor knows how it feels to be stared at first hand, as they were born with only four fingers. Babies who are born with underdeveloped hands suffer from a condition called Symbrachydactyly, which can be treated with surgery, physical therapy, and orthotics.

Sectoral heterochromia is a condition that makes a portion of one eye a different color. In some cases, it can look like the person’s wearing some pretty rad contact lenses. In this case, this person’s eye is part blue and part brown thanks to the lack of melanin (or excess of it!) which is the result from basically winning the genetic lottery, if you ask us. We could stare at this abnormality all day!

This person has a genetic condition known as Vitiligo which resulted in only half of their eyelashes turning white. When this person was 11, they woke up to find out that their eyelashes were now completely white. Doctors are still not sure about the cause of vitiligo, but they believe it’s an autoimmune condition which mistakenly attacks certain cells in a person’s body.

What are the chances that you have a sister in law or a friend with the same unique toes as you? Well, Redditor IanthegeekV2‘s wife discovered that she and her sister in law both had syndactyly connected toes, and they were beyond stoked. “They celebrated their similar trait with new tattoos,” he on a post.

Did you know that some people get dark streaks of hair for no particular reason? This just means that this kiddo has increased melanin in their hair. While it may look like the kid painted their locks with a Sharpie, there isn’t a name for when a person’s got increased melanin in a specific area. Some folks siply refer to it as a “birthmark”.

Tentacles On The Tongue

While it does look like a pretty badass Halloween prop, this person’s genetic condition is actually known as plica . These tentacle-like malformations of the tongue are pretty harmless, although they can get stuck to a person’s teeth more often than not. This person’s tongue tentacles probably make them pretty fun at parties, don’t you agree?