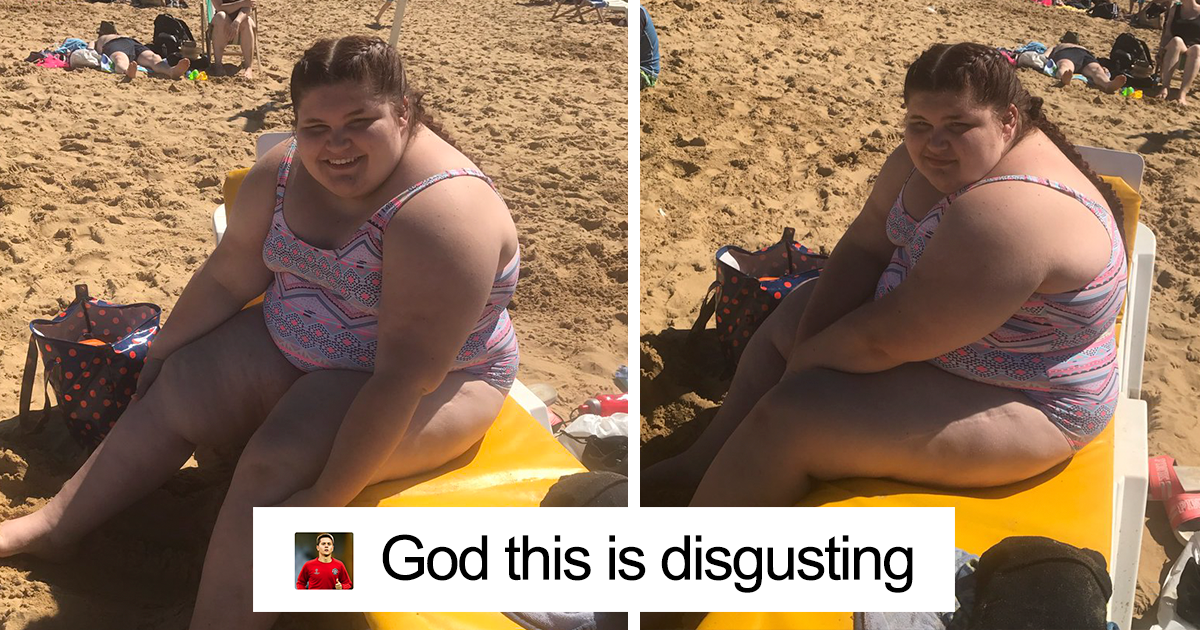 For many of us, the idea of tweeting a photo of ourselves in our swimsuits is unimaginably horrid.
The idea of strangers ogling and judging our bits is incredibly stressful.
But one 13-year-old has done just that in order to get over her ‘biggest fear’.

Paris Harvey suffers from a metabolic condition which means that she gains weight very quickly and struggles to lose it.She also has hip dysplasia, which means that one leg is shorter than the other – and she walks with a limp.These two conditions lead to people calling her fat and mocking her for ‘walking like a penguin’.

Since starting secondary school, Paris says that she’s been taunted by bullies who fat-shame and mock her for ‘walking like a penguin’.And their taunts have left her so body conscious ‘I got bullied in the past and after a while, you start to believe what people say,’ says Paris.
‘I became really insecure about how I looked. I can be eating the same food as the next person but I gain wait. It’s not like I’m sitting at home all day eating chips.‘It’s also hard for me to get around because of my hips and it is harder for me to make changes than it is for other people.
‘But I felt like I shouldn’t have to explain myself.’

[nextpage]
So, over Bank Holiday weekend, Paris decided to finally face her biggest fear – stripping down to her bathing suit at the beach. And guess what? She not only faced her fear but she embraced it too by taking pictures and posting them on Twitter!

Even though Paris did receive negative comments from people saying she was ‘promoting obesity’, she chose to “focus on the support because hate is nothing compared to love.” “I feel like we should embrace who we are,” Paris said. “I’m not making myself a model but I wanted to show people that it doesn’t matter what size you are – you are born into that body.”
The pics went viral been shared nearly 50,000 times and has 338,000 likes with hundreds sending her messages of support and gratitude.

You’re beautiful! You’ve inspired me so much that I’m going to start going out in my shorts which I’ve never done before,’ says one Twitter user.

Another says: ‘I know why it was one of your fears…you’re literally the cutest person on the beach and you were scared that everybody would get jealous’.

And yes, some were negative as well as there can’t be all positive.

Well according to Martin it could be some kind of disease or health problems, we don’t completely disagree with Martin here as we have seen some people facing health issues as well and it won’t be bad to check with doctors about the health. But in this case it’s not health issue and we think no one should be insulted in any way.

And there were some people who started debating with the negative comment posters because some people don’t agree with everything and they know their right to correct the negative and bright them with positiveness.

But in the end, Paris chose to “focus on the support because hate is nothing compared to love”

We completely agree with Wilmers here because we think beauty comes in all the shapes, size 0 is not only the best body for beauty. All the body sizes are beautiful and no one should feel bad because they don’t have size zero.