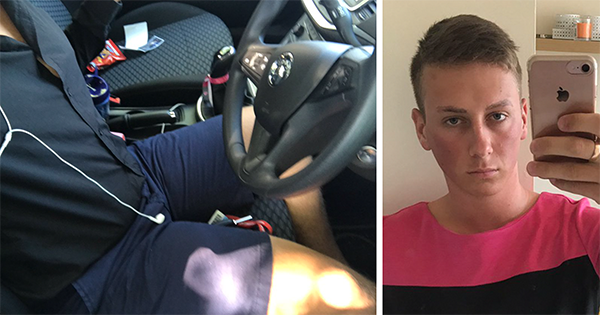 Office dress codes have become a hot-button issue in recent years, especially as hot temperatures outside force people into less-than-modest attire. An employee at a call centre in Buckinghamshire, UK, named Joey Barge recently faced up against his company’s code when he was sent home for wearing a smart pair of shorts on a nearly 30-degree summer day. In rebellion, he took a tip from a fellow Twitter user and came back in a dress.
“See you soon, twitter. I’ll be sent home soon,” he posted with a photo of himself sporting the neon-pink and black smock. Surprisingly enough, 20-year-old Joey was allowed to remain at work after changing, undoubtedly benefiting from strict UK laws that prohibit companies from discriminating against employees based on their sexuality or gender identity. His boss must have feared a trend of men turning up to the office ‘dressed up’ in solidarity with Joey, and promptly sent out a memo that the dress code had been temporarily amended – a smashing victory on Joey’s part, though we must admit that his dress looked rather fetching.
Follow the whole story with photos below, and let us know what you think!

UK temperatures are currently scorching at 30°C and higher, and office workers are feeling it

When it didn’t quite work out, a Twitter user suggested a clever way to bite back…

…And Joey went for it

However, he was allowed to stay, protected by anti-discrimination laws on gender expression

His boss, probably in shock, made some quick adjustments to the dress code after Joey’s stunt

“Ok but this was me sat in my office in a dress,” he wrote on Twitter, flaunting his new style

Internet reactions began pouring in, with some praising him and his “nice legs”…

…And others taking issue with his “big baby” attitude, as well as the dress itself

What do you think? Was Joey’s solution extra or unprofessional?