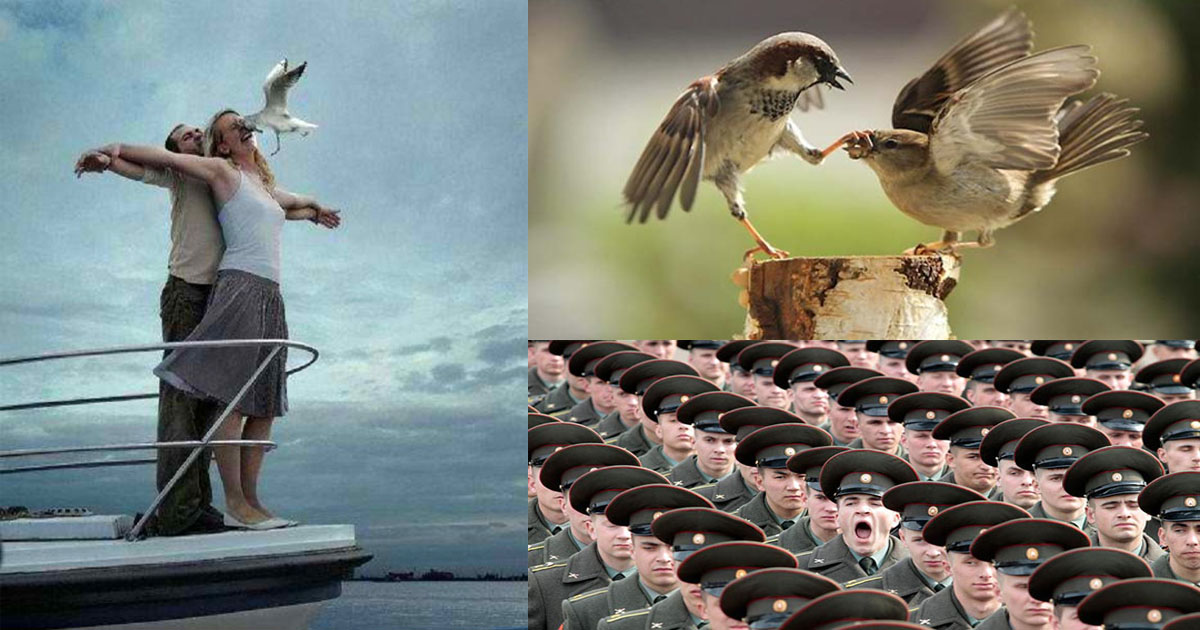 In our modern world, photography is more ubiquitous than it has ever been. No matter where you go, you’re surrounded by cameras. Whether on cell phones, tablets, computers, CCTV, or even good old fashioned video cameras, there’s a chance that this very moment is being captured.
You can take a thousand photos, but if you don’t capture something at just the right moment, you may never get the exact photo that you want. Sometimes, the perfect timing can make or break a photo, turning it into a hilarious coincidence or a beautiful illusion.

With perfect timing and a little help from a billowy wedding dress, this groom is suddenly married to a mythical creature.

Who says that cats are evil? This little guy found something special in the window, with a child’s reflection providing the smile for a perfectly timed photo.

Speaking of mythical creatures, one intrepid photographer was able to capture one when a massive goose leapt behind his cattle and spread his wings for takeoff.

While house cats usually shun water, their larger wild cousins are big fans of the wet stuff. In a flash, this tiger shook nearly every drip from his fur as the photographer captured it all mid-air.

While we realize that this is clearly tow different dogs, it’s much more fun to imagine that the boxer on the left has an especially giraffe-like neck, allowing him to survey the landscape.

With a mirrored bar and a little luck, one photographer managed to capture this suave bartender with a pair of shapely legs in a pencil skirt below his suit-vested top.

While gigantic ads may bother us in day to day life, they occasionally make for especially twisty moments of meta visuals. Here we see a water sliding couple appear to break the boundaries of their two dimensional ad, spraying onto the flooded streets themselves.

#8 Breaking Out In A Yawn

There’s hardly an organization on earth more uniformly organized than the military, but sleepiness knows no bounds. One man made for a perfectly symmetry-breaking photograph.

#9 That Really Is Where Babies Come From

New parents love gently tossing their babies into the air, but we doubt this father knew that he was about to illustrate the oldest lie in the book: that storks deliver babies!

#10 Shutting Down An Argument

There comes a point in every argument when you realize that it’s not going to end on its own. This bird took initiative, closing his friend’s beak.

We all know that bees die shortly after losing their stingers. But have you ever seen exactly how it happens? Here’s a painful reminder!

This couple tried to recreate the famous poster shot from the legendary film Titanic, where Leonardo DiCaprio embraced Kate Winslet on the titular cruise liner. Unfortunately for them and fortunately for us, a seagull decided to headbutt the pair.

The look of glee on the man’s face is matched only by the sudden realization dawning on the face of the woman. This perfectly captured moment sees a bit of waterborne shade before it makes a splash.

#14 Snowball To The Face

There’s rarely anything more satisfying than really nailing your friends in the face with a snowball, with the exception of capturing it perfectly on camera.

While you’ve likely seen dozens of images of birds catching their fishy prey, it’s not every day that we catch a moment like this. The fish was innocently leaping from the water directly into the bird’s beak, with a look of regret on its face.

While we’re proud to boast of all the tricks our dogs can do, it’s fair to say that they aren’t as impressive as this seemingly fire-breathing pup. Can your pet light an entire campfire by himself?

Perhaps in a demonstration of the power of a firehose, or a simple safety exercise accident, here we see a man blasting clear off the deck with a water cannon to the face. This one might sting a little!

Shaking your soda to get that rich, creamy volcano of fizz is one of life’s simplest pleasures. Capturing it mid-blast as a pair of toddlers look on is priceless.

Is the dog so afraid of water that he literally skips across the surface? We may never know, but this pool walk reminds us of a certain holy healer.

We got an especially good chuckle out of this one. While the tanned dude in the foreground makes sure not to smile too much, we see a lady in white apparently standing diagonally over the pool. This is the calm before the storm.

We hope that our extensive collection of perfectly timed photos has brightened your day and brought some laughs to your life. When the forces of happenstance and the ubiquity of cameras collide, magic can happen. Each of these spectacular images is a testament to the equally graceful and clumsy, and ultimately wondrous, world around us.