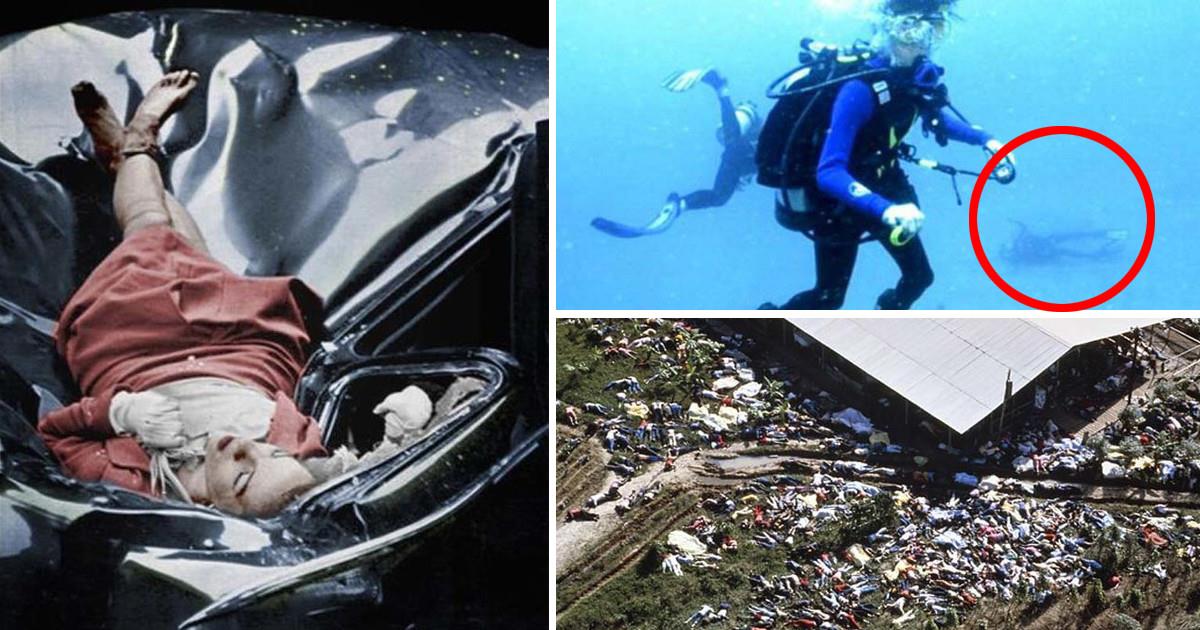 The appeal of horror movies is that they give people a way to experience the thrill of terror without actually having to put themselves in harm’s way. For the vast majority of us, the movie theater will be the closest we ever get to genuine horror.

For others, though, the horror of demons, ghosts, and murderers has real-world significance. These are the people who look closely at real life and realize just how chilling it can be. For evidence of this,you’re going to find many of the scary pictures below downright disturbing and unbelievable.

Some were taken minutes before or after tragedies and on deathbeds.
These scary pictures made their way into news headlines and buzzed around the internet for their mysterious nature.
They’re morbid and will definitely freak you out. They include demons, ghosts, murders, and horrific car accidents.
Check out the gallery of creepy pictures with horrific backstories below:

An American religious organization under the leadership of Jim Jones, in northwestern Guyana. A total of 909 Americans died in Jonestown, all but two from apparent cyanide poisoning, in an event termed “revolutionary suicide”.

#2 This woman in this photo is actually dead. Her husband took it two days after she passed away. There’s no word on what her cause of death was.

Photographs of deceased loved ones were a normal part of American and European culture in the nineteenth and early twentieth centuries.

#3 A little Polish girl who grew up in a concentration camp drawing a picture of “home.”

A child in a residence for disturbed children was asked to draw a picture of home. It shows how the horrors of the concentration camp warped her mind

#4 This man is unable to get off the subway tracks in New York City with a train bearing down.

The New York Post’s controversial photo taken of 58-year-old Queens resident Ki Suk Han, seconds before being fatally struck by a train.
He was reportedly pushed onto the tracks at 12:30 pm by a panhandler.

#5 A group of friends in Beirut, Lebanon, moments before a car bomb explosion, and then moments after. (The bomb was in the gold car you see in the first photo.)

#6 23-year-old Evelyn McHale’s body after leaping from the Empire State Building and landing on a United Nations limousine. Some call this picture “the world’s most beautiful suicide.”

#7 Shell-shocked soldier in the trenches of the First World War.

#8 The decomposing remains of a girl who got lost and died in the pitch blackness of the Odessa Catacombs in Ukraine.

#9 The aftermath of a horrifying car accident in 1945.

#10 Hospital cameras caught some sort of dark spirit looming over a patient one night. The patient died a few hours later.

#11 The body of John Torrington.

In the 1840s, John Torrington and a crew of explorers attempted to find the fabled Northwest Passage that would allow for quicker travel between North America and Asia. However, during the expedition, Torrington’s ship was damaged, and the crew was forced to trek back through Canada on foot. No one made it back. Torrington’s body was buried along the way, perfectly preserved by the frigid temperatures.

#12 Loana the Bloodthirster after her death in 1909. Allegedly she died from drinking her own blood.

The suspected witch was beaten to within an inch of her life by an angry mob before committing ritual suicide by consuming goblet after goblet of her own blood.

#13 The remains of a victim of spontaneous human combustion.

“Spontaneous human combustion” refers to the death from a fire originating without an apparent external source of ignition; the fire is believed to start within the body of the victim.

#14 Shadows of people vaporized when the atomic bomb was dropped on Hiroshima.

Permanent shadows, also called “Nuclear Shadows” were formed during the bombing of Hiroshima and Nagasaki. The reason behind the formation of these permanent shadows is what’s known as“thermal radiation”.

#15 Aftermath of the 1997 Heaven’s Gate suicide in San Diego, California.

On March 26, 1997, police discovered the bodies of 39 members of the group who had committed mass suic*de in order to reach what they believed was an alien space craft following Comet Hale–Bopp.
All members were dressed in dark clothing and Nike sneakers.

#16 The so-called “elephant’s foot” at the heart of the melted-down Chernobyl Nuclear Power Plant.

#17 Pennsylvania politician Budd Dwyer moments before he ended his life on live TV.

Dwyer was charged with agreeing to receive kickbacks worth $300,000 in return for using his office to steer the contract toward Computer Technology Associates, where it was discovered that state workers had overpaid federal taxes due to errors in state withholding.
January 22, 1987. On that day, Dwyer called a news conference in the Pennsylvania state capital of Harrisburg where he killed himself in front of the gathered reporters with a .357 Magnum revolver.

#19 The heart of accused vampire Auguste Delagrange. He was said to have killed at least 40 people in the early 1900s.

Auguste Delagrange was hunted down by a Roman Catholic priest, and a Voodoo Hougan during one of the worst outbreaks of vampirism in the United States.
Delagrange took refuge in an abandoned farmhouse on the outskirts of a small town in Louisiana. It was there that a stake was driven through his heart and his body destroyed.

#21 This photo taken by a diver in Australia accidentally captured the lifeless body of Tina Watson. Watson was killed by her husband while scuba diving during their honeymoon.

Husband Gabe Watson was convicted of the murder of his wife Tina, but walked free after the case was thrown out by a judge on the grounds that the prosecution had presented insufficient grounds for conviction.